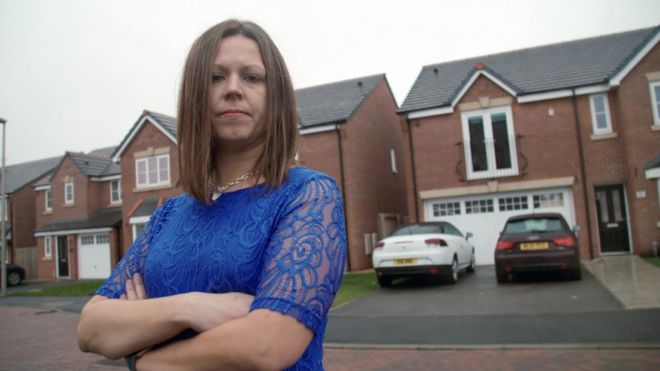 Katie Kendrick was among those whose freehold was sold on without her knowledge.

People buying new-build houses in England will no longer be obliged to enter leasehold agreements, the government has announced.

Anyone buying a flat – or a house – on a lease of longer than 21 years will also not have to pay any ground rent.

The announcement follows revelations that thousands of people buying new homes have been subject to what the government called “feudal practices”.

In some instances ground rents have been doubling every 10 years.

In other cases homeowners found their freehold had been sold to investment companies, and they were being told they would have to pay tens of thousands of pounds to buy it.

Earlier this year, Kate Kendrick told the BBC that buying her freehold would have cost her £13,300, after the developers, Bellway, sold it on without her knowledge.

The new rules will not cover houses that are in multiple ownership.

The announcement follows a government consultation, in which thousands of home-owners complained about leasehold practices.

“It’s clear from the overwhelming response from the public that real action is needed to end these feudal practices.”

However, the government will have to legislate for the changes, so it will take some time before they become law.

It is also unclear what relief there will be for the 1.4 million households across England that already own their houses under leasehold agreements.

Campaigners said the new measures would lead to a two-tier market.

The government said it would work with the Law Commission to support existing leaseholders, to make it easier for them to extend their leases, and help them with redress procedures.

Shares in house developers like Persimmon, Taylor Wimpey and Bellway fell as a result.

McCarthy and Stone, which builds and sells retirement apartments on leasehold deals, saw its shares fall by more than 8%. The company said the new measures would result in fewer houses being built.

What is a leasehold?